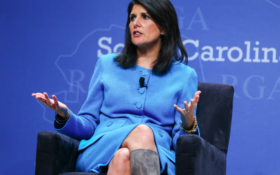 President Donald Trump’s Ambassador to the United Nations Nikki Haley just delivered a chilling message to the U.N., declaring herself the “new sheriff in town.”

And the Trump administration is not interested in taking prisoners.

Haley told an audience at the Jewish AIPAC Conference in Washington,D.C. Monday that “the days of Israel-bashing are over” at the United Nations.

“I’m not there to play,” the former South Carolina governor said, “and what I wanted to make sure of was that the United States started leading again.”

“There are a lot of threats to peace and security, but you are not going to take our number one Democratic friend in the Middle East (Israel) and beat up on them,” she declared.

She also displayed her tough attitude on Iran and the nuclear deal, saying, “We’re going to watch them like a hawk. I wear heels. It’s not for a fashion statement — it’s because if I see something wrong, we’re going to kick them every single time.”

Haley then unleashed a warning of a 40-nation walkout to come over the U.N.’s proposed ban on nuclear weapons internationally.

“You are going to see almost 40 countries that are not in the General Assembly today. To ban nuclear weapons now would make us and our allies more vulnerable and would strengthen bad actors like North Korea and Iran who would not abide by it. Is there anyone that believes that North Korea would agree to a ban on nuclear weapons.”

Haley has proven to be tough and unapologetic… and her message likely has the U.N. shaking in their boots.

Because under Trump, America will no longer be taken advantage of.