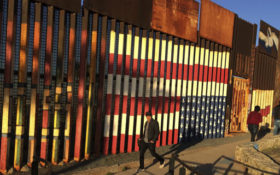 Judge Trevor McFadden threw out a lawsuit by Democrats on Tuesday, ending their legal attempt to tie up $6.7 billion in border wall funding.

According to Fox News, Democrats claimed that Trump had attempted to “steal” federally appropriated funds.

Judge McFadden threw out their lawsuit, and said Democrats didn’t have a leg to stand on. In fact, he ruled they were manipulating the legal process to prevent the White House from doing it’s job.

“This case presents a close question about the appropriate role of the Judiciary in resolving disputes between the other two branches of the Federal Government,” McFadden wrote in his opinion. “The Court declines to take sides in this fight between the House and the President.”

In other words, the courts ruled “there’s no reason for us to get involved” — so there’s no hope for Democrats.

The radical left is running out of chances fast.

“The House retains the institutional tools necessary to remedy any harm caused to this power by the Administration’s actions. Its Members can, with a two-thirds majority, override the President’s veto of the resolution voiding the National Emergency Declaration. They did not. It can amend appropriations laws to expressly restrict the transfer or spending of funds for a border wall under Sections 284 and 2808. ”

This ruling clashed with a prior ruling drafted by a U.S. District Court Judge Haywood Gilliam, who last week said that the Trump administration could not reallocate funds toward the southern border.’

Haywood was a Obama-appointed judge. The White House appealed, and won.