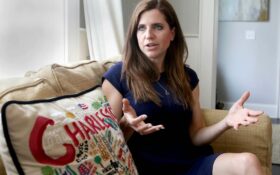 President Donald Trump took the time to congratulate two big conservative winners from this week’s primaries in both Georgia and South Carolina.

The wins came at a time when, throughout ongoing unrest in America, so much is at stake in the House and Senate for both Republicans and Democrats.

In Georgia, Trump-backed candidate Dr. Rich McCormick was declared victorious in the state’s primary for the 7th congressional district. According to Forsyth County News, he is an ardent supporter of Trump policies such as “reducing regulations and promoting entrepreneurship.”

“We need you in Washington, D.C. badly,” Trump wrote on Twitter in congratulating the former military man-turned doctor.

Congratulations to Dr. Rich McCormick (@RichforGA) on a BIG WIN in Georgia last night! We need you in Washington, D.C. badly. You have my Complete and Total Endorsement! #MAGA #GA07 https://t.co/5lvlSoaoU2

Mace avoided the divided and bitter Republican primary that caused a rift two years ago that allowed Cunningham to upset the election, when he became the first Democrat to win the seat in more than 40 years.

Her victory of course caught the President’s eye.

“We need you in Washington fast,” he wrote.

Congratulations on last nights BIG WIN, @NancyMace! Keep up the great work so we can #MAGA! We need you in Washington fast. You have my Complete and Total Endorsement! #SC01 https://t.co/GBe7NJBztj

Mace is the first woman to graduate from The Citadel and has been in the state House for two years.

Cunningham used a combination of opposition to offshore drilling and a personal touch to become South Carolina’s first new Democrat in Congress since 1982 in the district that runs along the coast from Charleston to Hilton Head Island.

Republicans almost immediately made flipping the seat back a 2020 priority.

Mace defeated Kathy Landing, a businesswoman and financial planner who is on the Mount Pleasant Town Council; Chris Cox, the co-founder of Bikers for Trump; and Brad Mole, chairman of the Lowcountry Affordable Housing Coalition.

The general election race promises to be competitive and expensive. Cunningham has $2.6 million in his campaign bank account, and Mace has raised $1.3 million so far.

Only 34 of the 170 members of the General Assembly face a challenger from their own party — or just 20%.

A candidate must get a majority of the votes cast to be nominated. Otherwise, the top two vote-getters must regroup quickly for a June 23 runoff.