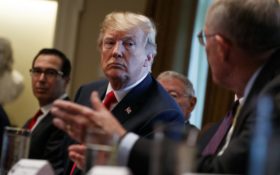 President Donald Trump has taken the latest border crisis into his own hands after lawmakers refused to pass legislation that resolves the much publicized issue.

Trump said he would be signing an executive order later Wednesday that would end the process of separating children from families after they are detained crossing the U.S. border illegally.

“We want to keep families together. It’s very important,” Trump told reporters during a White House meeting with members of Congress. “I’ll be signing something in a little while that’s going to do that.”

Homeland Security Secretary Kirstjen Nielsen, the president and other officials have said the real way to end the practice is for Congress to pass new legislation, but since Democrats and Republicans cannot seem to agree, Trump will have to take action himself.

The news in recent days has been dominated by searing images of children held in cages at border facilities, as well as audio recordings of young children crying for their parents — images that have sparked backlash and saddened hearts of all parties.

Trump pointed to those images in his meeting, saying they’d “affect everybody” but that he was torn. “We want the heart,” he said, “but we also want strong borders and we want no crime.”

Also playing a role: First lady Melania Trump. One White House official said Mrs. Trump had been making her opinion known to the president for some time that she felt he needed to do all he could to help families stay together, whether it was by working with Congress or acting on his own.

Nielsen traveled to the Hill Wednesday afternoon to brief lawmakers. And members on the fence over pending immigration legislation headed to the White House to meet with Trump.

Trump had tweeted earlier Wednesday, “It’s the Democrats fault, they won’t give us the votes needed to pass good immigration legislation. They want open borders, which breeds horrible crime. Republicans want security. But I am working on something – it never ends!”

It’s the Democrats fault, they won’t give us the votes needed to pass good immigration legislation. They want open borders, which breeds horrible crime. Republicans want security. But I am working on something – it never ends!

The administration recently put into place a “zero tolerance” policy in which all unlawful border crossings are referred for prosecution — a process that moves adults to the custody of the U.S. Marshals Service and sends many children to facilities run by the Department of Health and Human Services.

The action, according to people familiar with it, wouldn’t end the zero tolerance policy, but would aim to keep families together while they are in custody and ask the Department of Defense to help house the detained families.

Two people close to Homeland Security Secretary Nielsen said early Wednesday that she was the driving force behind the plan to keep families together after they are detained crossing the border illegally.

One of the people said Nielsen, who had become the face of the administration’s policy, had little faith that Congress would act to fix the separation issue and felt compelled to act. Nielsen was heckled at a restaurant Tuesday evening and has faced protesters at her home.

Planning at the Justice Department had been underway over the past several days to provide the president with options on the growing crisis, said the official, who, like others, spoke on condition of anonymity to discuss the effort before its official announcement.

The person said Trump called the Justice Department Wednesday morning asking for the draft order. The official did not know what prompted Trump to change course.