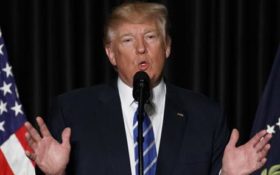 President Donald Trump is fed up with the mainstream media spin — so he’s taking his message about the travel ban fight straight to the people.

On Wednesday, Trump unloaded on the court that is deliberating his immigration and refugee executive order for having motivations he described as “so political.”

Speaking to a group of police chiefs and sheriffs, Trump honed in on the language used in a provision detailing presidential powers to limit “inadmissible aliens.”

“It was written beautifully,” Trump told the attendees, asserting that even “a bad high school student would understand this.”

“Courts seem to be so political and it would be so great for our justice system if they would be able to read a statement and do what’s right,” he added. “And that has to do with the security of our country, which is so important.”

Big increase in traffic into our country from certain areas, while our people are far more vulnerable, as we wait for what should be EASY D!

The 9th U.S. Circuit Court of Appeals is weighing the appeal of Trump’s executive order on immigration, which temporarily suspends the country’s refugee program and bans travel for citizens of seven countries identified as terror hotspots. In a hearing Tuesday, judges on the appeals court challenged the administration’s claim that the ban was motivated by terrorism, but also questioned an attorney’s argument that it unconstitutionally targeted Muslims.

Hundreds of members of the Major Cities Chiefs Association and Major County Sheriff’s Association were in the standing room crowd, some in uniform but the majority in plain clothes.

They snapped photos with their phones as the president spoke, and his comments about combating drug abuse and the targeting of police officers drew an enthusiastic response from the crowd.

Trump, in his remarks, sought to link his comments about the court battle over his executive order to the law enforcement community in attendance.

“We have to allow you to do your job,” he said. “And we have to give you the weapons that you need, and this is a weapon that you need and they’re trying to take it away from you.”

Trump also reiterated his vow to reduce violence in Chicago, saying that “no one in America should be punished” because of their birthplace. He pledged to provide resources to police departments and promised “zero tolerance” for violence against law enforcement.

Trump also promised to work on combating drug abuse and said there should be resources to deal with a “mental health crisis.”

Comment “Build the wall!” below if you support Trump’s travel ban.