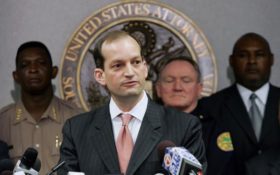 President Donald Trump moved to fill vacancies in his new administration on Thursday — and his latest nomination to lead the Labor Department has liberals shocked.

So much for the leftist narrative that Trump is a secret racist.

Acosta was chosen a day after fast-food executive Andrew Puzder withdrew his nomination for labor after losing support among Republican senators.

The official spoke on condition of anonymity ahead of Trump’s announcement at a White House news conference.

Trump opened Thursday’s “listening session” with House members by saying he would announce a replacement labor secretary candidate at the news conference.

“The man I’ll be announcing for labor is a star, great person,” said Trump, who has blamed Senate Democrats for complicating the confirmation process for several of his Cabinet nominees.

The White House has said Trump asked for Flynn’s resignation because Flynn had misled Pence over his dealings with Russia and whether he had discussed sanctions with Russia’s ambassador to the U.S. before Trump’s Jan. 20 inauguration. Flynn previously had denied those conversations to Pence and other top officials.

Trump appeared Wednesday to side with his former aide, saying it was “really a sad thing that he was treated so badly.”

On Thursday, he warned in a pair of tweets that “low-life leakers” of classified information will be caught. As journalists were being escorted out of the breakfast meeting, Trump responded to a reporter’s question on the subject by saying: “We’re going to find the leakers” and “they’re going to pay a big price.”