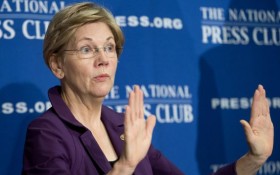 President Donald Trump is already preparing for his next challenger — and according to insiders, the White House team has already figured out his opponent.

“The Republican National Committee (RNC), in coordination with the White House, is assembling a research file on Warren and other possible 2020 opponents and frequently circulates memos critical of her to reporters,” The Hill reported Tuesday.

In other words, the same Trump team that took down former Florida Gov. Jeb Bush and his seemingly unstoppable donor machine is already targeting Warren — and this time, they have a three year head start.

According to The Hill, “Trump allies are practically giddy at the prospect of facing the liberal firebrand senator, a former Harvard Law School professor whom they see as an easy target for a president who railed against political elites during his successful 2016 campaign.”

Trump himself has been warming up for the fight as well.

The president told supporters at a National Rifle Association meeting last month, “I have a feeling that in the next election, you’re going to be swamped with candidates.”

“It may be Pocahontas, remember that,” Trump said to laughter.