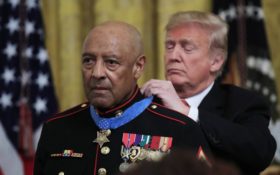 President Donald Trump presented the nation’s highest military honor Wednesday to an 80-year-old retired Marine sergeant major who five decades ago “fought with unmatched bravery” at the beginning of one of the Vietnam War’s longest and bloodiest battles.

John Canley’s heroism includes twice scaling a hospital wall in view of the enemy to help wounded Marines and carry them to safety.

“I like brave people. You meet them right here,” Trump said as he opened the ceremony. “Fifty years ago, an American Marine fought with unmatched bravery in one of the longest and bloodiest battles of the Vietnam War, the battle of Hue city.”

According to the White House, Canley, a native of Caledonia, Arkansas, now living in Oxnard, California, fought off multiple enemy attacks over several days in January and February of 1968 while his company of about 150 men carried out a counter-offensive to retake the city of Hue from North Vietnamese and Viet Cong forces, which numbered into the thousands.

The operation by the North Vietnamese and Viet Cong forces became known as the Tet Offensive because coordinated attacks against targets in South Vietnam, including Hue, were launched as the Vietnamese celebrated the lunar new year, or Tet holiday.

“He assaulted enemy strongholds, killed enemy fighters and with deadly accuracy did everything you had to do,” Trump said. “He raced into heavy machine gun fire on many occasions — all to save his fellow Marines. In one harrowing engagement after another, John risked his own life to save the lives of those under his command.”

Canley took over after his commanding officer was severely wounded in the battle to retake Hue, which was held by at least 6,000 communist fighters, Trump said.

On the fifth day of combat, Canley’s company was charged with liberating the Joan of Arc school, which had become the communists’ strategic and symbolic stronghold in the city.

Machine gun fire greeted them. Canley and a colleague charged forward with rocket launchers, killing enemy fighters and driving them from their positions, Trump said.

“The enemy didn’t know what the hell happened,” Trump said.

Canley personally saved the lives of more than 20 Marines during seven days of “unrelenting combat,” the president said.

As the years passed, some of the Marines who fought alongside Canley pushed for him to receive the highest commendation for a U.S. service member. After a review of the case, Defense Secretary Jim Mattis agreed in December 2017 that Canley was deserving of the honor.

Congress passed legislation waiving a five-year time limit on awarding the medal. Trump signed the bill into law in January.