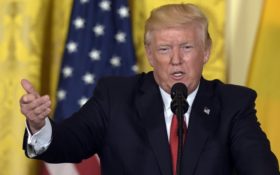 In retaliation, Trump has announced he’s taking a sledgehammer to Obama’s legacy — and the biggest blow is on it’s way soon.

Trump is expected to withdraw the United States from a landmark global climate agreement, a White House official said Wednesday. It was a hallmark deal Obama wanted to cement his legacy — and it’s about to be scrapped.

Leaving the deal would fulfill a central campaign pledge, but would anger liberals that spent years to produce the accord to reduce carbon emissions.

I will be announcing my decision on the Paris Accord over the next few days. MAKE AMERICA GREAT AGAIN!

Trump’s top aides have been divided on the accord.

He was to meet later Wednesday with Secretary of State Rex Tillerson, who has favored remaining in the agreement. Chief strategist Steve Bannon supports an exit, as does Environmental Protection Agency administrator Scott Pruitt. Senior adviser Jared Kushner generally thinks the deal is bad but would like to find a way to see if U.S. emissions targets can be changed.

Trump’s influential daughter Ivanka Trump’s preference is to stay, but she made it a priority to establish a review process so her father heard from all sides, said a senior administration official who was not authorized to discuss her thinking and spoke on condition of anonymity.

Nearly 200 nations, including the United States under Obama’s administration, agreed in 2015 to voluntarily reduce their greenhouse gas emissions in an effort to combat climate change. Withdrawing would leave the United States aligned only with Russia among the world’s industrialized economies.

Sponsored: This SCAM kills an American every 5 minutes

Still, he said that the carbon levels agreed to by the prior administration “would be highly crippling to the U.S. economic growth,” and said that, if the president had to choose between limiting carbon and economic growth, “growing our economy is going to win.”

Word of Trump’s expected decision came a day after the president met with Pruitt. Like his boss, the EPA head has questioned the consensus of climate scientists that the Earth is warming and that man-made emissions are to blame.

Once in power, Trump and Pruitt have moved to delay or roll back federal regulations limiting greenhouse gas emissions while pledging to revive long-struggling U.S. coal mines.

What is not yet clear is whether Trump plans to initiate a formal withdrawal from the Paris accord, which under the terms of the agreement could take three years, or exit the underlying U.N. climate change treaty on which the accord was based.

Senate Majority Leader Mitch McConnell, R-Ky., and 21 other Republican sent Trump a letter last week urging him to follow through on his campaign pledge to pull out of the climate accord. Most of the senators who signed are from states that depend on the continued burning of coal, oil and gas.