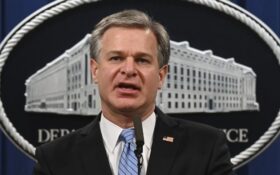 If and when President Donald Trump wins re-election… lookout.

According to insiders, it’s a well-known secret that the president has a post-election “execution list” of White House officials he’s ready to replace.

Axios says that when the dust settles, FBI Director Christopher Wray, CIA Director Gina Haspel, and Defense Secretary Mark Esper will all be subject to the chopping block.

In fact, sources reportedly told Axios that both Wray and Haspel are deeply resented by Trump and his closest White House associates. Trump — according to news sources — would’ve gotten rid of them long before the election.

But according to Fox News, his team is keeping them in place until after the final votes are tallied.

“Advisers have consistently told POTUS to wait until after the election if he wants to replace Wray,” an anonymous senior official told Fox.

Although there are a multitude of names swirling around as to who may be shown the door, a recent Fox News scoop reports conflicting rumors around CIA Director Haspel. One confidant maintained that Haspel wasn’t going anywhere, and that she and the President have a strong relationship.

And the political pundits say the list doesn’t stop there, with even Education Secretary Betsy DeVos’ name appearing in reported rumors.

The flurry of rumors just before Nov. 3. indicate that Trump has been unsatisfied with the job performance of some of his most prominent officials. He’s even publicly expressed his disappointment in U.S. Attorney General William Barr and U.S. Attorney John Durham.

Trump had been waiting on the results on the DOJ report of former President Barack Obama and his team’s role of spying on the Trump campaign, but after promises of many big charges, has largely come up empty.

And the president is tired of waiting.