Trump pardons two turkey's ahead of Thanksgiving - The Horn News 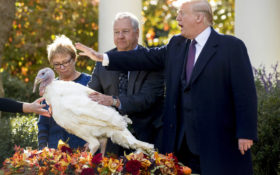 President Donald Trump is preparing to use the power of his office to keep a pair of turkeys off the Thanksgiving table.

Trump’s poultry pardon Tuesday will mean that the two turkeys — a 39-pound bird named Peas and a 41-pounder named Carrots — will get to live the rest of their lives at a Virginia farm.

First lady Melania Trump is joining her husband for the ceremony in the White House Rose Garden.

Trump was traveling to his Florida estate later Tuesday to spend the Thanksgiving holiday with family.