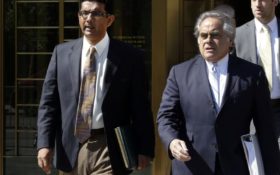 President Donald Trump has announced that he will pardon conservative commentator and top critics of former President Barack Obama Dinesh D’Souza, who pleaded guilty to campaign finance fraud. The White House announced later Thursday that the pardon had been granted.

As he left Washington to fly to Texas, Trump tweeted —

Will be giving a Full Pardon to Dinesh D’Souza today. He was treated very unfairly by our government!

Trump has also mused pardoning celebrity Martha Stewart, who was convicted in 2004 of obstructing justice and lying to the government about why she unloaded stock just before the price plummeted. She served five months in prison. Her representatives did not immediately respond to a request for comment.

“I think to a certain extent Martha Stewart was harshly and unfairly treated. She used to be my biggest fan in the world,” Trump said.

The federal prosecutor who oversaw Stewart’s case in New York was James Comey, one of Trump’s principal antagonists and the man he fired as FBI director last year.

Trump told reporters Thursday that no one asked him to pardon D’Souza, whose case had become a cause in conservative circles. Trump said he only knew D’Souza from TV and reading his works. He said he telephoned D’Souza on Wednesday night.

“I’ve always felt he was very unfairly treated,” he said, adding that D’Souza should have just been given a “quick, minor fine. What they did to him was horrible.”

D’Souza thanked those who urged Trump to pardon him, and took a swipe at Preet Bharara, the U.S. attorney who prosecuted him.

“My heartfelt thanks to those who prayed for me, supported me & reached out on social media to President Trump to pardon me,” D’Souza tweeted. In a separate tweet, titled “KARMA IS A B—- DEPT:” D’Souza accused Bharara of being out to “destroy a fellow Indian American to advance his career. Then he got fired & I got pardoned.”

In response, Bharara acknowledged Trump’s right to issue pardons but said “D’Souza intentionally broke the law, voluntarily pled guilty, apologized for his conduct & the judge found no unfairness. The career prosecutors and agents did their job. Period.”

D’Souza, a filmmaker, author and speaker, was sentenced in September 2014 to five years of probation after he admitted making illegal contributions to a U.S. Senate candidate in New York. He acknowledged he had two close associates each contribute $10,000 to the Senate campaign of Republican Wendy Long with the understanding that he would reimburse them. Individual contributions to any one candidate were limited to $5,000 at the time. Long lost to Democratic Sen. Kirsten Gillibrand.

D’Souza, who made the documentary “2016: Obama’s America,” had claimed he was selectively prosecuted, but the judge said he had produced no evidence of this.

D’Souza is a former policy analyst under President Ronald Reagan and a prolific author well-known for works critical of Obama, as well as former Secretary of State Hillary Clinton, Trump’s Democratic rival in the 2016 presidential election. His 2016 documentary, “Hillary’s America: The Secret History of the Democratic Party,” attempted to takedown the former secretary of state ahead of the election.