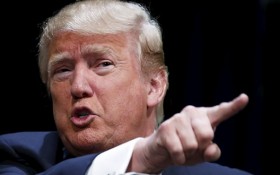 The effort to repeal and replace Obamacare has been dragged out for months by establishment politicians – and President Donald Trump has officially had enough.

If Republican Senators are unable to pass what they are working on now, they should immediately REPEAL, and then REPLACE at a later date!

That’s an approach advocated by Kentucky Republican Sen. Rand Paul, who’s said he opposes the bill, which would do both at once.

Senate Majority Leader Mitch McConnell postponed a vote on the bill Tuesday because of opposition from conservatives and moderates. He’s trying to nail down changes by this weekend to assure the bill’s passage after the July 4 recess.

Top Senate Republicans hoping to rescue their push to repeal Obama’s health care overhaul may try doing it by preserving one of his tax boosts on the rich.

It’s a break from dogma by a party that has long reviled tax boosts, and most things achieved by Obama. But it could help attract votes from moderate Republican senators.

And it underscores McConnell’s feverish effort to yank one of his and President Donald Trump’s foremost priorities from the brink of defeat.

The money would instead be used to bolster their proposed health care subsidies for lower-income people.

“The whole idea is to do health care first because you gain an advantage there to go on and do tax reform,” said Sen. Pat Roberts, R-Kan. “We’ve sort of bollixed that up, but I’m encouraged.”

It is important for Congress to resolve the health bill before moving on to a tax overhaul.

Here’s why: The health bill provides nearly $1 trillion in tax cuts that won’t add to the nation’s mounting debt. Republicans are counting on those tax cuts to help them write a new tax code that raises less money.

Also, Republicans are using a complicated rule that enables the Senate to pass both a health bill and a tax package with a simple majority, preventing Senate Democrats from blocking the legislation. Under the rule, Congress has to resolve health care — by either passing a bill or killing it — before lawmakers can pass a tax package.

In a bid for conservative support, Senate leaders are also considering an amendment to let insurers offer plans with low premiums and scant benefits.

No matter what they do, one thing is for sure, Trump wants Obamacare repealed, and he wants it now.