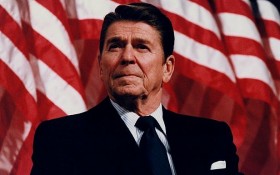 President Donald Trump is on pace to eclipse an iconic milestone held by Ronald Reagan.

By the end of Reagan’s era, the former president had confirmed 383 judicial appointments, leaving behind a record pace no other president has ever matched, before or since.

That is… until now. Trump — who currently sits at 200 — is scheduled to finally break the judicial milestone, this according to his senior adviser Kimberly Guilfoyle.

Should he be re-elected, he would shatter the record.

Trump’s appointments of Justices Neil Gorsuch and Brett Kavanaugh to the Supreme Court received much of the headlines, but most of the ideological court changes have taken place behind-the-scenes.

Trump’s aggressive court strategy could in the end be his crowning achievement.

Guilfoyle, in a Western Journal op-ed, described Reagan’s conservative appointments and how they ignited a 30-year wave of conservative judges upholding conservative values, such as “the individual right to keep and bear arms,” but not limited to preserving the Tenth Amendment and defending the freedom of religion.

Trump, who according to Associated Press has secured the most judicial appointments at this stage of a presidency in four decades, could influence a very similar movement.

At a time when civil unrest is splitting the nation in two, and liberals aim to burn the system to the ground, the necessity for conservative minds to uphold the fabric of America is at an all-time high.

The next 30 years will be crucial.

But there’s no indication that Trump is anywhere close to being done.

With Justice Ruth Bader Ginsberg’s age-related health issues and Justice Clarence Thomas’ rumored retirement thoughts, there could be two more Supreme Court spots to fill in the next four years.