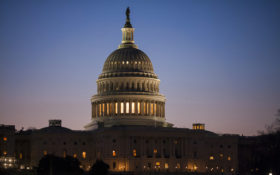 Trump warned the lawmakers, many of whom critics have called “RINOs” (Republican in Name Only), that “ObamaCare is dead” — and it was time for his political party to get behind his healthcare reform plan.

Trump says he wants people to know he’s “100 percent behind” the House Republican health care bill, and met with Republican lawmakers at the White House Friday morning to make that clear.

The message seemed to have been received. Trump says the attendees were “mostly no’s, yesterday” and now “they’re all yes’s.”

Trump went on to say that the mainstream media is dishonestly representing the legislation. He also says some changes have been made to the bill.

Lawmakers at the meeting include Rep. Gary Palmer, a Republican from Alabama, who voted against the plan in a House budget committee vote.

One lawmaker said the changes include “work requirements and block grants.”

Trump calls the House legislation “a great plan” and says there will be “bidding by insurance companies like you’ve never seen before.”

Health secretary Tom Price also spent the morning prodding establishment Republicans to “get together and collaborate” on a healthcare overhaul GOP leaders can push through the House.

Price spoke to reporters before a Friday meeting with House Republicans.

President Donald Trump has been talking with GOP lawmakers about potential changes. Price wouldn’t say what revisions might occur, but said Trump thinks the current measure addresses his priorities.