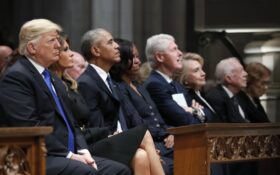 The East Room event involves the sitting president unveiling a portrait of the predecessor. According to NBC News reports, Obama is not interested in attending.

Trump is also reportedly not interested in having Obama join him.

In recent weeks, Trump has grown vocal about “Obamagate” — a scandal that indicates Obama knew about the Deep State wiretap of the Trump 2016 presidential campaign. The 45th Presidenclaims Obama committed a crime and is responsible for the relentless investigations that have hounded the Trump administration since he took office.

Obama has taken the accusation personally. According to reports, he is refusing to attend his portrait unveiling.

He’s also bucked the tradition of former presidents not attacking their successors.

During his 2020 commencement speech to college graduates, Obama attacked Trump’s response to the Wuhan virus pandemic. He said many leaders, implying Trump, “aren’t even pretending to be in charge.”

Obama responded to Obamagate accusations on social media with a simple message.

Michael Beschloss of NBC News said, “You’ve got a president who’s talking about putting the previous one in legal jeopardy, to put it nicely. We have not seen a situation like that in history. It takes antipathy of a new president for a predecessor to a new level.”

What has typically been observed as a bipartisan event has become a stand-off between Obama and Trump.

Obama’s wife has also joined in the political drama.

The current and former First Ladies are historically present to the event, too.

But in 2018, Mrs. Obama told CNN that Mrs. Trump refused her help as she was transitioning into the White House.

Could Mrs. Obama be as resentful as her husband at the Trump administration?

But what we do know is, the relationship between both parties is ugly.