N. Korea SLAPPED by Trump with harshest EVER sanctions - The Horn News 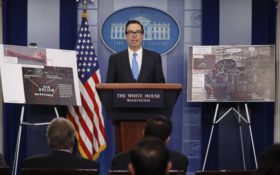 The administration billed it as the largest installment of North Korean economic restrictions to date. President Donald Trump went further, declaring in a speech Friday at the Conservative Political Action Conference that it was “the heaviest sanctions ever imposed on a country before.”

While the number of companies from North Korea and other nations was high, the economic impact is unclear. It was certain to be less than previous U.S. measures that targeted large banks and business networks in China and Russia that deal with the North.

However, it significantly tightens the noose on North Korean trading. Treasury Secretary Steven Mnuchin told reporters that the U.S. has now imposed more than 450 sanctions against the North, about half of them in the last year — including “virtually all their ships that they’re using at this moment in time.”

The United Nations Security Council has imposed three sets of sanctions on North Korea in the past year to deprive it of revenue and resources for its nuclear and ballistic missile development. The weapons pose an emerging threat to the U.S. mainland. Washington is particularly concerned about exports of North Korean coal that are prohibited by the U.N. sanctions and ship-to-ship transfers of imported oil and petroleum products.

The Treasury Department said it was barring U.S. business transactions with nine international shipping companies from China, Hong Kong, Singapore and Panama, and nine of their vessels. It also blacklisted 16 North shipping companies and 19 of their North Korean-flagged vessels.

Additionally, the department designated a Taiwanese citizen, Tsang Yung Yuan, and two companies he owns or controls. Tsang was said to have coordinated North Korean coal exports with a Russia-based North Korean broker, and attempted $1 million oil deal with a Russian company sanctioned for dealing with the North.

Mnuchin said the actions will significantly hinder North Korea’s ability to conduct evasive maritime activities that facilitate illicit coal and fuel transports, and “erode its abilities to ship goods through international waters.” He vowed the U.S. would “do everything” to stop the ship-to-ship transfers.

“We are putting companies and countries across the world on notice that this administration views compliance with U.S. and U.N. sanctions as a national security imperative. Those who trade with North Korea do so at their own peril,” Mnuchin said.

In his speech, Trump said “hopefully something positive can happen” from the sanctions pressure.

The announcement comes as South Korea hosts the Winter Olympics, an occasion the two Koreas have used as an opportunity to ease tensions and restart talks. Although South Korea is a close U.S. ally, animosity between Washington and Pyongyang still runs high.

Ivanka Trump, the president’s daughter and adviser, arrived in South Korea on Friday to attend the closing ceremony this weekend. At a dinner with South Korean President Moon Jae-in, she reaffirmed “our commitment to our maximum pressure campaign to ensure that the Korean Peninsula is denuclearized.” Mnuchin said Ivanka Trump had spoken to Moon about the new sanctions before the announcement.

The U.S. government also issued Friday a global shipping advisory highlighting the sanctions risk to those who enable shipments of goods to and from North Korea. It alerted industries to North Korea’s “deceptive shipping practices,” which includes falsifying the identity of vessels and disabling transponders that track ships’ movements.

The Treasury Department published photos of a U.S.-designated North Korean vessel, Kum Un San 3, which it said used false identifying information and conducted an illicit ship-to-ship transfer, possibly of oil, with a Panama-flagged vessel that was among the ships sanctioned Friday.