Trump nominated for Nobel Peace Prize by.... WHO!? - The Horn News 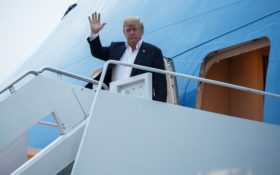 President Donald Trump was nominated for a Nobel Peace Prize by Norwegian lawmakers for his work in securing denuclearization of the Korean peninsula.

According to a Norwegian news agency, Christian Tybring-Gjedde and Per-Willy Amundsen, members of the Progress party said that Trump has “taken a huge and important step in the direction of the disarmament, peace and reconciliation between North and South Korea​.”

The Norwegians are not the only ones who believe Trump deserves the 2019 Nobel Peace Prize, a group of U.S. lawmakers are also backing the president’s nomination.

In month, 18 Republican lawmakers sent a letter to the Nobel Committee officially nominating Trump for the prize due to his efforts to disarm North Korea.

Trump was very humble when asked if he believed he deserved the prize, saying, “Everyone thinks so, but I would never say it.”

Nominations for the world’s most coveted prize are sent to Norway and the committee is appointed by parliament. The decisions are made independently.

Nominations for 2018’s prize closed in January, but nominations are still open for 2019 until next February.

“What’s going on now is historic,” Progress Party member Per-Willy Amundsen told NRK. “A process is underway to ensure world peace in the future. It’s a fragile process, but we must of course do what we can to help this process bring good results.”