Warning: If you saw this Trump-Obama story, it's FAKE! - The Horn News 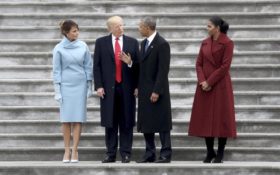 President Donald Trump hasn’t canceled federal funding for former President Barack Obama’s library, despite claims in a story circulating among liberals on social media. The Obama Foundation says private donations are paying for the construction and it’s not relying on federal money to administer its collection of documents.

The false story on the Convenile site declares that Trump has canceled $8 million for his predecessor’s “free house and library.”

The story also claims Trump rejected the idea of a new home for Michelle on the top floor of the building. Kate Berner, a spokeswoman for the Obama Foundation, says drawings for the presidential center in Chicago never included an apartment.

Existing presidential libraries are run by the National Archives and Records Administration. The foundation announced last spring it would break from that tradition. NARA spokesman James Pritchett says the Archives will administer Obama’s documents but the center will receive no federal dollars.