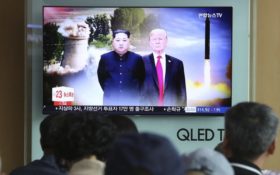 President Donald Trump announced on the eve of his historic meeting with North Korea, that he will be leaving Singapore early because the nuclear negotiations have moved “more quickly than expected.”

On the day before the meeting, weeks of preparation appeared to pick up the pace, with U.S. and North Korean officials meeting throughout Monday at a Singapore hotel. American and North Korean diplomats engaged in last-minute negotiations on issues dividing both sides.

South Korea’s presidential office says Trump filled Moon on the details of the pre-summit negotiations between Washington and Pyongyang. The Blue House didn’t elaborate on what Moon was told during the 40 minute telephone call.

The Blue House says Moon told him South Koreans will be praying for a “miraculous result.”

Moon said earlier he hopes the summit will be a “historic milestone” for peace but it will only be the first step in a complex and lengthy process. Moon says the hostility “cannot be solved at once by a single meeting between the leaders.”

The White House said the summit was to kick off at 9 a.m. Tuesday. After greeting each other — an image sure to be devoured around the world — the two leaders planned to sit for a one-on-one meeting that a U.S. official said could last up to two hours, with only translators joining them. The official wasn’t authorized to discuss the plans and insisted on anonymity.

The daylong summit will also include a working lunch and a larger meeting involving aides to both leaders, the White House said. On the U.S. side, Trump was to be joined by Pompeo, chief of staff John Kelly, national security adviser John Bolton and U.S. Ambassador to the Philippines Sung Kim, along with a few others.

After concluding the summit, Trump planned to speak to reporters in Singapore before flying home, the White House said.

The U.N. chief is commending the two leaders for pursuing a diplomatic solution and “seeking to break out of the dangerous cycle that created so much concern last year.”

Pompeo, addressing reporters ahead of the summit, said the U.S. was prepared to take action to provide North Korea with “sufficient certainty” that denuclearization “is not something that ends badly for them.”

“I can only say this,” Pompeo said. “We are prepared to take what will be security assurances that are different, unique, than America’s been willing to provide previously.”

In Singapore, the island city-state hosting the summit, the sense of anticipation was palpable, with people lining spotless streets Monday waving cellphones as Trump headed to meet Singapore’s Prime Minister Lee Hsien Loong. As Trump and Lee sat down for a working lunch at the Istana house, Trump sounded optimistic, telling Lee, “we’ve got a very interesting meeting in particular tomorrow, and I think things can work out very nicely.”

Trump also called the leaders of South Korea and Japan in advance of the summit, Pompeo said. Meanwhile, U.S. and North Korean officials huddled at a hotel Monday ahead of the sit-down aimed at resolving a standoff over Pyongyang’s nuclear arsenal.

Delegates were outlining specific goals for what Trump and Kim should try to accomplish and multiple scenarios for how key issues can be resolved, an official briefed on the discussions said.

The meetings also served as an ice breaker of sorts as the teams worked to get better acquainted after decades of minimal U.S.-North Korea contact.

The White House says President Donald Trump plans to visit U.S. military bases in Guam and Hawaii on the return from his historic summit with North Korea’s leader.