Trump: My biggest fear is... - The Horn News 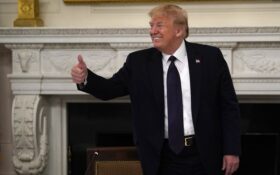 A shift to mail voting is increasing the chances that Americans will not know the winner of November’s presidential race on election night, a scenario that is fueling worries about election integrity.

President Donald Trump says the switch to all mail-in voting — which could lead to a spike in election fraud — is one of his biggest fears heading towards the 2020 election.

The Republican Party has spent millions of dollars on legal efforts to curtail mail-in voting.

“My biggest risk is that we don’t win lawsuits,” Trump said this week. “We have many lawsuits going all over. And if we don’t win those lawsuits, I think — I think it puts the election at risk.”

State election officials in some key battleground states have recently warned that it may take days to count what they expect will be a surge of ballots sent by mail out of concern for safety amid the pandemic. In an election as close as 2016′s, a delayed tally in key states could keep news organizations from calling a winner.

“It may be several days before we know the outcome of the election,” Jocelyn Benson, Michigan’s Democratic secretary of state, said in an interview. “We have to prepare for that now and accept that reality.”

Ohio’s Republican secretary of state, Frank LaRose, pleaded for “patience” from the public. “We’ve gotten accustomed to this idea that by the middle of the evening of election night, we’re going to know all the results,” LaRose said Wednesday at a forum on voting hosted by the Bipartisan Policy Center. “Election night reporting may take a little longer” this year, he warned.

Delayed results are common in a few states where elections are already conducted largely by mail. But a presidential election hasn’t been left in limbo since 2000, when ballot irregularities in Florida led to weeks of chaos and court fights.

Trump has disparaged mail-in voting as fraudulent and has claimed that widespread mail balloting will lead to a “rigged” election.

Meanwhile, some liberal operatives, lawyers, and even the Democratic presidential nominee have grown increasingly vocal with conspiracy theories that Trump will try to steal the election.

Joe Biden recently said he thinks Trump may use his office to intervene: “Mark my words, I think he is going to try to kick back the election somehow, come up with some rationale why it can’t be held.”

Trump said last year in an interview that he would accept the results of the 2020 election.

As voters look for a safer alternative to in-person voting, election officials from both parties have promoted mail-in and absentee voting options, and requests for mail ballots have surged in the primaries.

Many states expect to be scrambling to process millions more in November.