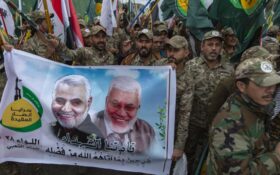 Iraqi militia factions expected the usual cash handout when the new head of Iran’s expeditionary Quds Force made his first visit to Baghdad earlier this year, succeeding the slain Gen. Qassim Soleimani. Instead, to their disappointment, Esmail Ghaani brought them silver rings.

For his second visit, Ghaani had to apply for a visa, something unheard of in Soleimani’s time — a bold step by Baghdad’s new government effectively curtailing Iran’s freedom of movement inside Iraq.

The episodes illustrate Iran’s struggles to maintain sway over Iraqi militias six months after President Donald Trump ordered a controversial airstrike against Soleimani and top militia leader Abu Mahdi al-Muhandis. Iran at the same time is grappling with the economic fallout from U.S. sanctions and the coronavirus outbreak.

The military strike, criticized by the mainstream media at the time, is paying off.

Without imposing figures like Soleimani and al-Muhandis to unify disparate factions, divisions have emerged in the Popular Mobilization Forces, the umbrella group of mainly Shiite forces.

Their deaths also disrupted a trajectory to institutionalize the militias, which al-Muhandis had been meticulously planning with Soleimani’s blessing.

“With al-Muhandis gone, there is an absence of an anchor around which (PMF) politics revolves,” said Fanar Haddad, an Iraq researcher.

Charismatic and a fluent Arabic speaker, his rapport with Iraqi officials was unmatched. He slipped in and out of Iraq regularly to plan, mediate and give out cash assistance. One surprise visit by him was sufficient to broker agreement between rival factions, officials said.

Since his death, Shiite factions have shown discord, arguing over a premier candidate twice before they settled on Mustafa al-Kadhimi.

Soleimani’s successor as Quds Force commander, Ghaani, is less familiar with Iraqi militia leaders and speaks to them through an interpreter. Meetings in Iraq have increasingly been handled by Iranian Ambassador Iraj Masjedi, himself a former Quds Force member.

Ghaani’s gift of silver rings — symbolically important in Shiite Islam — rather than cash came during a meeting in April with leaders of several militia factions, according to three officials. They spoke on condition of anonymity because they were not authorized to talk to the press.

Ghaani told them that, for the moment, they would have to rely on Iraqi state funding, they said, a sign of Iran’s economic crisis.

The PMF are paid primarily through the state — $2 billion in the 2019 budget — but the funds are not dispersed equally. Smaller Iranian-backed groups rely on other informal means of revenue and receive extras from Iran, roughly $3-9 million, two Iraqi officials close to the militias said.

The PMF was created in 2014 as a framework to organize and pay the thousands who volunteered to fight the Islamic State group after a fatwa by Iraq’s top cleric, Grand Ayatollah Ali al-Sistani. Since then, the Iranian-backed group’s political and military might has soared.

Under the staunchly pro-Iranian al-Muhandis, it became a channel for Tehran’s influence.

His death opened the door for factions opposed to that influence — particularly ones associated with al-Sistani — to break from the PMF leadership. Militias complain that Iran-friendly groups receive preferential treatment.

The man seen as al-Muhandis’ likely successor, Abdulaziz al-Mohammadawi, known as Abu Fadak, met opposition from factions who saw him as the Iranian-backed choice. He has not been officially recognized by the prime minister, though he has assumed some administrative duties, according to officials.

Some of the most Iran-friendly militias under the PMF have shown signs of splintering.

Attacks against U.S. forces in March were claimed by a purported new group, Usbat al-Thairen, believed to have emerged from the powerful Kataib Hezbollah, which the U.S. accused in previous attacks.

Recently, four militias affiliated with the shrines connected to al-Sistani said they would take orders directly from Iraq’s premier, bypassing the PMF leadership.

A senior official from Kataib Hezbollah said the move has weakened the PMF and its legitimacy among the public. For many Iraqis, the group’s credibility is derived from al-Sistani’s fatwa.

The fissure was plain to see when, weeks into his leadership, Prime Minister al-Kadhimi visited the PMF headquarters. To his right, sat figures friendly with Tehran, to his left, those affiliated with al-Sistani.

It marks a “major wrench” by the Shiite establishment led by al-Sistani into Iran’s broader plans, said Randa Slim, director of the Conflict Resolution and Track II Dialogues Program at the Middle East Institute.

“They are basically saying we do not want an organ that takes its orders from Iran,” she said.