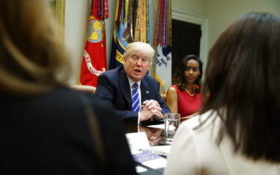 President Donald Trump says that empowering and promoting women in business are priorities in his administration.

In a round-table discussion, the president is telling a group of female business owners that his team will work on barriers women face. He says the administration is also trying to make childcare more affordable and accessible.

The gathering comes on the first work day since the Republican-led plan to repeal and replace the nation’s health care law was pulled before a House vote, a major setback for the Trump administration.

The White House is trying to focus this week on another campaign priority: creating jobs and economic issues.