Trump meeting with survivors in Las Vegas - The Horn News 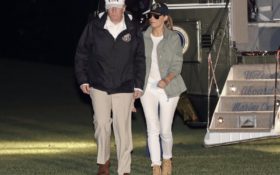 President Donald Trump will reckon with the aftermath of a deadly mass shooting in Las Vegas as he meets Wednesday with survivors and law enforcement officials in a time of grief.

Trump heads to the city days after a gunman on the 32nd floor of a Vegas Strip hotel and casino opened fire on people at an outdoor country music festival below. The Sunday night rampage by Stephen Craig Paddock killed at least 59 people and injured 527, some from gunfire and some from a chaotic escape.

Speaking to reporters on Tuesday, Trump said he’d be in Las Vegas to “pay our personal respects and condolences to everybody. What happened is such a tragedy. So unnecessary. Who can believe what happened to Las Vegas?” He later added that it was “a very horrible thing even to think about.”

Trump was to be joined by first lady Melania Trump. House Majority Leader Kevin McCarthy said he and Rep. Mark Amodei, a Nevada Republican, also would make the trip.

Trump’s trip to Las Vegas follows his Tuesday travel to hurricane-ravaged Puerto Rico. During that trip, he highlighted Puerto Rico’s relatively low death toll compared with “a real catastrophe like Katrina,” when as many as 1,800 people died in 2005 as levees protecting New Orleans broke. He also focused on the best of the reviews he and his administration are getting rather than criticism of the federal response to Hurricane Maria.

Trump offered somber remarks about the shooting from the White House on Monday, saying “our unity cannot be shattered by evil, our bonds cannot be broken by violence.”