Trump: I may break up the 9th circuit court - The Horn News 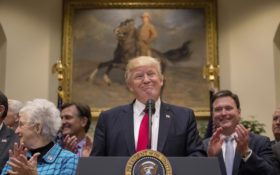 The 9th circuit court has attempted to sabotage Trump at every turn. First with his travel ban and most recently with his pledge to revoke federal funding from sanctuary cities.

Sponsored: SHOCKING: How to ELIMINATE your joint pain in 21 days

And now he’s he officially had it.

Asked during a White House interview by the Washington Examiner if he’d thought about proposals to break up the court, Trump replied, “Absolutely, I have.” He added that “there are many people that want to break up the 9th Circuit. It’s outrageous.”

And he’s right. In fact, 79% of cases from the 9th circuit court have been reversed between 2010-2015, according to Politifact, which legal experts say proves the ninth circuit regularly misrules.

Sponsored: QUIZ: Do you know which household item causes diabetes?

It’s no wonder politicians would want this court broken up – it’s wasting the time of lawmakers and money of taxpayers all attempting to fulfill a liberal agenda.

The comments echoed his Twitter criticism of the court Wednesday morning.

Trump called U.S. District Judge William Orrick’s preliminary injunction against his order stripping money from sanctuary cities “ridiculous” on Twitter. He said that he planned to take that case to the Supreme Court. But an administration appeal of the district court’s decision would go first to the 9th Circuit.