Mexico forced to sell their presidential plane by Trump!? - The Horn News 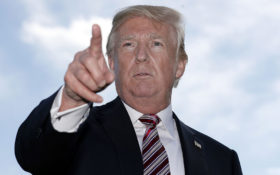 President Donald Trump stood on the South Lawn of the White House and told reporters about his successful deal with Mexico on Wednesday — and Mexico’s president confirmed it.

Trump held up a folded white piece of paper to reporters, which contained the details of the agreement between Trump and Mexican officials.

What’s the truth? The “blank piece of paper” media conspiracy was quickly debunked by a Washington Post photographer — and the Mexican government is now making moves that suggest a deal has been struck on illegal immigration.

Even better? Mexico is paying for it, Mexican President Andres Manuel López Obrador has implied.

He’s selling his Mexico’s own “Air Force One” in order to fund the deal, The Guardian reported. “Andrés Manuel López Obrador has promised to fund a crackdown on migrants to Mexico from Central America with proceeds from the sale of his office’s aircraft, a 787 Dreamliner.”

In other words, a big win for Trump — and another loss for the mainstream media.

For years, skeptics had been claiming that Mexico wouldn’t pay for a wall. But that tune has started to change.

Though the funds acquired from the plane won’t directly fund a U.S.-Mexico border wall, what’s most important is that new funds are being allocated by the Mexican government to stop illegal immigration on their own southern border.

The funds will go immediately to 6,000 troops of the National Guard deployed to the area where Guatemala borders Mexico, The Guardian reported — proof that not only is this a good deal for America, but for Mexico as well.

The Mexico-Guatemala border could be seen as the best line of defense before illegal immigrants make it to the U.S.-Mexico border.

One less plane in the sky means the American president might finally be getting the support he deserves.