Trump lawyer: 'Wrong! President NOT under investigation' - The Horn News 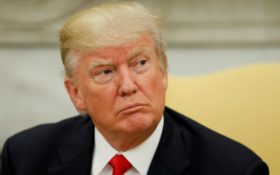 But according to a top lawyer in the president’s legal team, that’s fake news.

Despite the unfair witch hunt from the political establishment and the liberal media, this legal experts says it’s simple: Trump is not under federal investigation.

Appearing on a series of morning news programs, attorney Jay Sekulow repeatedly stressed Sunday that “the president has not been and is not under investigation.” He said a Friday tweet from Trump, which liberals claim is proof, was specifically directed at a story in The Washington Post about the expanding probe into Russia’s election meddling.

As evidence, Sekulow said that Trump has not been notified of any investigation. He also cited the testimony from former FBI Director James Comey before the Senate intelligence committee, in which Comey repeatedly said he had told Trump he was not under investigation.

Asked about the possibility that a secret investigation that the president just does not know about, Sekulow said: “I can’t read people’s minds, but I can tell you this, we have not been notified that there’s an investigation to the president of the United States. So that — nothing has changed in that regard since James Comey’s testimony.”

The Post quoted anonymous sources — a controversial tactic that critics say has caused a flood of “fake news” in cable news and the media — when they reported last week that Robert Mueller was looking into whether Trump obstructed justice.

Mueller — the special counsel appointed to investigate Russian involvement in the 2016 presidential election — was appointed by Deputy Attorney General Rod Rosenstein and has expansive powers to probe any matters that develop from his initial investigation.

The MAKE AMERICA GREAT AGAIN agenda is doing very well despite the distraction of the Witch Hunt. Many new jobs, high business enthusiasm,..

“Witch hunt” has become Trump’s preferred phrase to describe a probe into Russian election interference that Trump supporters have said is politically motivated.

No evidence has ever been presented that show the president had any nefarious ties to Russia. Trump has also repeatedly told the media that he’s not attempted to block the investigation into Russia’s election-related hacking.

The president has directed some of his frustration at Rosenstein and Mueller, but Sen. Marco Rubio said Sunday that he does not expect Trump to seek to fire them.

“I don’t believe it’s going to happen,” said Rubio on CNN’s “State of the Union.” ”The best thing that could happen for the president, and the country, is a full and credible investigation.”