Trump lashes out over FBI raid - The Horn News 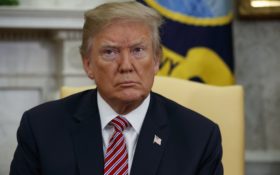 On Twitter Wednesday Trump took a shot at Rosenstein, as he complained about what he calls the “Fake & Corrupt Russia Investigation.” Trump said the probe was “headed up by the all Democrat loyalists, or people that worked for Obama. Mueller is most conflicted of all (except Rosenstein who signed FISA & Comey letter). No Collusion, so they go crazy!”

Much of the bad blood with Russia is caused by the Fake & Corrupt Russia Investigation, headed up by the all Democrat loyalists, or people that worked for Obama. Mueller is most conflicted of all (except Rosenstein who signed FISA & Comey letter). No Collusion, so they go crazy!

Trump also said: “No Collusion or Obstruction (other than I fight back), so now they do the Unthinkable, and RAID a lawyers office for information! BAD!” And he insisted the White House was “Very calm and calculated.”

….doing things that nobody thought possible, despite the never ending and corrupt Russia Investigation, which takes tremendous time and focus. No Collusion or Obstruction (other than I fight back), so now they do the Unthinkable, and RAID a lawyers office for information! BAD!

But nervous White House aides expressed new fears about the president’s unpredictability in the face of the Cohen raid, which he viewed as an assault on a longtime defender and a sign that Mueller’s probe into potential ties between Russia and the Trump campaign was “going too far.”

Trump also announced Tuesday he was cancelling plans to attend the Summit of the Americas over the weekend as well as an overnight visit to Colombia.

The president had been telling confidants for weeks that he was not eager to make the three-day trip, which had already been shortened from original plans, according to two people who have discussed it with him in recent weeks but were not authorized to disclose the private conversations. His decision not to travel was publicly tied to the need to monitor the situation in Syria, but privately Trump said he didn’t want to be away from the White House amid developments in the China trade dispute and in the Mueller investigation.

Trump also expressed confidence in the loyalty displayed by Cohen, his longtime personal and professional fixer, who ascended to one of the most powerful roles at the Trump Organization not filled by a family member. Cohen has steadfastly denied wrongdoing in his $130,000 payment to adult-film actress Stormy Daniels and has publicly defended Trump, but he has confided in associates that he is fearful of being a fall guy, according to a person familiar with his thinking but not authorized to speak publicly about private discussions.

Cohen has said he took out a personal line of credit on his home to pay Daniels days before the 2016 election and without Trump’s knowledge. The raid of his office was overseen by the U.S. attorney’s office in Manhattan and based in part on a referral from Mueller.

“He certainly believes that he has the power to do so,” she said at Tuesday’s press briefing.

Under Justice Department regulations, only Rosenstein, who oversees the Russia investigation, can fire Mueller.

Republican Sens. Thom Tillis of North Carolina and Lindsey Graham of South Carolina and Democratic Sens. Chris Coons of Delaware and Cory Booker of New Jersey planned to introduce legislation Wednesday that would give any special counsel a 10-day window in which he or she could seek expedited judicial review of a firing, according to two people familiar with the legislation. They were not authorized to discuss the bill ahead of its release and requested anonymity.

Trump spent Monday evening calling associates to vent and gauge their reaction to the news. He bitterly complained that the raids were meant to ruin Cohen’s life and expressed frustration that it was another front from which to attack his presidency, according to a person familiar with the conversations but not permitted to discuss them publicly.

Trump also revived his broadsides on Rosenstein as well as Rosenstein’s boss, Attorney General Jeff Sessions, whom he belittled to confidants for recusing himself from the investigation and, in turn, delivering him to Mueller.

The White House insisted Trump was focused on the response to Syria following the country’s apparent use of chemical weapons on civilians over the weekend, killing more than 40 people. A military strike would mark Trump’s second retaliatory strike against Syrian President Bashar Assad’s government at a time when Trump is seeking to reduce the U.S. footprint in Syria.

The discussions come as Trump’s newest national security adviser, John Bolton, stepped into the job this week. He encouraged Trump to skip the trip to South America to manage the Syria strategy.

Bolton, a seasoned bureaucratic operator, has been expected to put his stamp on the National Security Council staff. NSC spokesman Michael Anton resigned over the weekend, with two people familiar with the situation saying Anton resigned after learning he would be fired. Trump’s homeland security adviser, Thomas Bossert, exited Tuesday. Bossert had overseen the administration’s response to the 2017 hurricane season and was credited by his colleagues for leading the administration’s efforts to bolster cybersecurity resiliency across government and private industry.

Asked if Bolton forced Bossert out, Sanders said: “I’m not going to get into specific details about the ongoings of personnel, but I can tell you that he resigned. The president feels he’s done a great job and wishes him the best.”

The mood at the NSC this week was described as grim, with aides fearful over Bolton’s plans. More senior-level departures are expected in the coming weeks, said two people familiar with the dynamic but not authorized to discuss it publicly.

Trump’s administration has set records for turnover in his 15 months in office at all levels, with Bossert marking at least the 13th official who held the rank of assistant to the president at the start of the administration to depart.

There is growing concern in Trump’s orbit that the turmoil will only continue following the release next week of former FBI director James Comey’s book, which promises to reveal new details about his conversations with the president and the Russia probe. An administration official said the White House would largely defer to outside surrogates to push back on Comey, but there was concern as to how the director’s interviews could rile up the president.