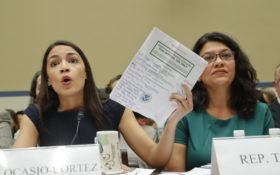 President Donald Trump said four congresswomen should go back to the “broken and crime infested” countries they came from.

“So interesting to see ‘Progressive’ Democrat Congresswomen,” he wrote on Twitter, “who originally came from countries whose governments are a complete and total catastrophe, the worst, most corrupt and inept anywhere in the world (if they even have a functioning government at all), now loudly and viciously telling the people of the United States, the greatest and most powerful Nation on earth, how our government is to be run.”

“Why don’t they go back and help fix the totally broken and crime infested places from which they came. Then come back and show us how it is done.”

White House officials moved Monday to defend his incendiary weekend tweets, Trump refused to apologize and asked on Twitter when “the Radical Left Congresswomen” would “apologize to our Country, the people of Israel and even to the Office of the President, for the foul language they have used, and the terrible things they have said.”

“So many people are angry at them & their horrible & disgusting actions!” he wrote.

Asked whether Trump’s comments were racist, Marc Short, chief of staff to Vice President Mike Pence, defended Trump, telling reporters he had been responding to “very specific” comments made by Omar, who was born in Somalia, and not making a “universal statement.”

“I don’t think that the president’s intent any way is racist,” said Short, repeatedly pointing to Trump’s decision to choose Elaine Chao, who was born outside the country, as his transportation secretary.

“The administration is welcoming of all nationalities into the United States,” he said.

Trump continued to fan the flames, tweeting, “If Democrats want to unite around the foul language & racist hatred spewed from the mouths and actions of these very unpopular & unrepresentative Congresswomen, it will be interesting to see how it plays out.”

Omar ignited a bipartisan uproar in Washington several months ago when she suggested that members of Congress support Israel for money, while Tlaib riled up a supportive crowd by calling the president a profanity and predicting that Trump would be removed from office.

He added: “These places need your help badly, you can’t leave fast enough. I’m sure that Nancy Pelosi would be very happy to quickly work out free travel arrangements!”

“Let’s be clear about what this vile comment is: A racist and xenophobic attack on Democratic congresswomen,” tweeted Sen. Elizabeth Warren, a Democratic presidential candidate.

Trump appeared unbowed Sunday night when he returned to Twitter to say it was “so sad” to see Democrats sticking up for the women. “If the Democrat Party wants to continue to condone such disgraceful behavior,” he tweeted, “then we look even more forward to seeing you at the ballot box in 2020!”

Ocasio-Cortez, who is of Puerto Rican descent, was born in the Bronx, New York, and raised in suburban Westchester County.

Pressley, the first black woman elected to the House from Massachusetts, was born in Cincinnati.

Omar, the first Somali native elected to Congress and one of its first Muslim women, was born in Somalia but spent much of her childhood in a Kenyan refugee camp as civil war tore apart her home country.

She immigrated to the United States at age 12, teaching herself English by watching American TV and eventually settling with her family in Minneapolis.

Tlaib was born in Detroit.