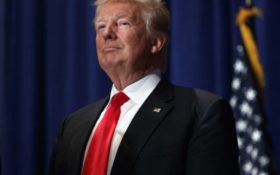 Radical Islamic terrorists vowed there would be retaliation if America ever thought about making this move. So former President Barack Obama never dared.

But President Donald Trump just did it… and Trump’s move to recognize Jerusalem as Israel’s capital on Wednesday has both American liberals and extremist Muslims howling with anger.

The recognition of Israel’s control over the city will be welcomed by Israel, a close American ally and the most successful democracy in the Middle East. It will be popular with pro-Israel evangelical Christian voters who make up a key part of Trump’s base.

But it will also trigger outrage in the region that had grown accustomed to Obama’s appeasement.

Israel claims all of Jerusalem as its capital, while the Palestinians claim the city’s eastern sector, captured by Israel in the 1967 Mideast war, as the capital of a future independent state. These rival claims lie at the heart of the decades-long Israeli-Palestinian conflict.

The conflict is focused largely on the Old City, home to Jerusalem’s most important Jewish, Christian and Muslim holy sites, and in particular on a hilltop compound revered by Jews and Muslims. The compound, known to Jews as the Temple Mount, is the spot where the biblical Jewish Temples stood thousands of years ago and is considered the holiest site in Judaism. Today, it is home to the Al Aqsa Mosque, the third-holiest site in Islam, and the iconic gold-topped Dome of the Rock.

While Israel controls the city and its government is based there, its annexation of east Jerusalem is not internationally recognized.

On the campaign trail, Trump took a strongly pro-Israel stance and promised to relocate the U.S. Embassy from Tel Aviv, where most countries keep their embassies, to Jerusalem.

Under American law, the president must sign a waiver every six months that leaves the embassy in Tel Aviv. In June, Trump renewed the waiver, as a string of predecessors has done. This week, another six-month deadline passed without Trump renewing it.

U.S. officials say Trump will instruct the State Department on Wednesday to begin the multi-year process of moving the U.S. Embassy to the holy city. The officials say the recognition of Jerusalem as Israel’s capital will be an acknowledgement of “historical and current reality” rather than a political statement but that moving the embassy will not happen immediately.

Recognizing Jerusalem as Israel’s capital could allow Trump to say that he kept a campaign promise. It also will thrill Israel, whose prime minister, Benjamin Netanyahu, is one of Trump’s biggest supporters on the global stage.

On the ground, very little will change. Netanyahu’s office and official residence are in Jerusalem, as are the country’s parliament, Supreme Court and Foreign Ministry. Visiting world leaders immediately travel to Jerusalem for meetings with Israeli officials.

Much of Jerusalem is an open city where Jews and Palestinians can move about freely, though a separation barrier built by Israel more than a decade ago slices through several Arab neighborhoods and requires tens of thousands of Palestinians to pass through crowded checkpoints to reach the center of the city.

The wall has also effectively minimized the amount of radical Islamic terror attacks the country has faced, and is seen by many as a blueprint for the United States’ own border wall.