Trump just made his move... and it's huge - The Horn News 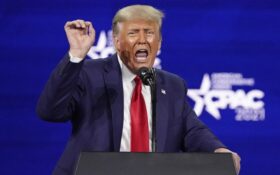 Former President Donald Trump made his move and opened his checkbook, reserving millions of dollars in airtime for ads to bolster his endorsed candidates in key midterm races just one month before Election Day.

Trump’s newly-formed MAGA Inc. super PAC will begin airing ads Saturday in Nevada, Georgia, and Arizona, according to Medium Buying, an ad tracking firm. The group is already airing ads in Pennsylvania and Ohio, home to two of the most consequential and competitive Senate races in the country.

The Georgia spending is particularly notable, coming as Trump’s hand-picked Republican Senate candidate Herschel Walker’s campaign has been rocked by reports alleging he encouraged and paid for an ex-girlfriend’s 2009 abortion. Walker, a longtime football icon, backed a national ban on abortion during his primary, and has said he does not believe in exceptions even in cases of rape, incest, or when the health of a pregnant woman is at risk.

The Trump ad set to air in Georgia, which was shared with The Associated Press, focuses on his rival, Democratic Sen. Raphael Warnock, and tries to cast Warnock and his party as too extreme.

“From D-Day to drag queen story time, America has lost its way,” its narrator says. “Chaos at the border. Crime in our neighborhoods. A collapsing economy. Biden and Warnock did that,” it claims.

In total, the super PAC appears to have spent close to $5 million on its initial investment. That includes $954,000 in Georgia, $512,000 in Nevada and $1.16 million in Arizona, according to Medium Buying, in addition to $1.34 million in Ohio and $829,000 in Pennsylvania, according to AdImpact, another ad tracking firm.

MAGA Inc. spokesman Steven Cheung declined to say how much additional spending Trump had planned beyond the initial reservations. “We’re not going to telegraph our spending but it’s a significant buy,” he said.

The super PAC’s first wave of ads are all negative spots aimed at turning voters off the Democratic rivals of Trump-endorsed candidates. The first attacked Pennsylvania Democrat John Fetterman, who is running against Republican nominee Mehmet Oz, by portraying Fetterman as soft on crime.

“John Fetterman wants ruthless killers, muggers and rapists back on our streets,” it charges, labeling the lieutenant governor “dangerous.”

The second targeted Ohio Democratic Senate candidate Tim Ryan for voting with his party as a member of Congress, using footage from a speech in which he joked that he would “suck up a little bit” to Senate Democratic Leader Chuck Schumer, “his future boss.” Ryan, who is running against Trump-endorsed Republican JD Vance, has run as centrist trying to win back the Rust Belt voters who have soured on the party in recent years.

WATCH: Brutal new ad from #MAGAInc exposing leftwing fraud @TimRyan for being a liberal suck up, who votes with Schumer, Pelosi and Biden 100% of the time! #OHSen pic.twitter.com/RvVgJMW8KX

The ads released so far do not mention Trump, who remains a deeply divisive figure, but one who is extremely popular with the Republican base.

Trump had been under growing pressure to finally start spending on midterm races after playing an outsize role in the primaries and pushing his favored candidates. Senate Minority Leader Mitch McConnell, in particular, had urged candidates with Trump’s support to ask him to open his checkbook heading into the race’s final stretch.

The notoriously thrifty former president’s Save America PAC, his main fundraising vehicle since leaving office, ended August with more than $90 million in the bank. Trump aides have discussed transferring a portion of that money to MAGA Inc., which could later be used to support a presidential campaign should Trump decide to run again, though campaign finance experts are divided on the legality of such a move.

Trump has continued to tease another presidential run, telling supporters at a rally in Warren, Michigan, last weekend, “We’ll be talking about great things hopefully in the not so distant future.”

“Oh I think you’re going to be happy,” he went on to say. “But first we have to win a historic victory for the Republican Party this November.”