Trump, Jr. STUNNED the world with THIS shocking message - The Horn News 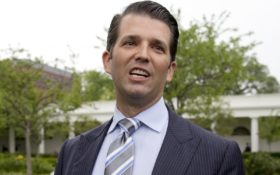 It’s a “welcome to Washington” message that only a Trump could send!

Incoming Rep. Alexandria Ocasio-Cortez (D-N.Y.) is riding into town on a message of opposition to everything President Donald Trump represents.

But the young “Democratic socialist” already has something in common with the president – and that led to a brief moment of bonding… perhaps even a Christmas truce… with Donald Trump Jr.

This one will be pretty familiar to Trump supporters.

She’s under ATTACK by the media!

“One disappointment about DC is the gossip that masquerades as ‘reporting,’” she wrote on Twitter this week.

Yes, the very same D.C. media elites that have helped prop her up are now busily trying to tear her down.

Ocasio-Cortez has accused the mainstream media of “fake news,” claiming they’ve distorted the truth and even outright lied about her.

One of the reports said she’s targeting fellow Democratic lawmaker Rep. Hakeem Jeffries, also of New Yorker, by preparing to support a primary challenge against him.

Ocasio-Cortez, of course, won her own seat by challenging an incumbent in her district, and the “Justice Democrats” with which she is aligned has already put out notice that no one is safe unless they support the group’s far-left agenda.

However, she said the Politico report is “birdcage lining,” and pointed out that the ONLY on-the-record source in the entire piece was a denial.

“Their articles are printed + distributed to **Congressional offices** – w/ no named sources,” she wrote in disbelief. “It’s really unfortunate.

That led to an unexpected note of sympathy from Donald Trump Jr.

“Welcome to our world,” he replied. “You think that’s bad? Imagine what it’s like when they actually hate you.”

He’s got a point.

Ocasio-Cortez has been a darling of the leftist media. They breathlessly hang on her every word… repeat her every statement as if it’s a decree of global importance… and report on her every action.

They’ve even written fawning stories about her LIPSTICK.

Yet despite their clear affection for this leftist figure, the two-faced D.C. media mafia has no problem slamming her… mocking her… and, she says, outright lying about her.

And the Jeffries report wasn’t the first example.

Last month, Politico claimed she got into a fight with Rep. Frank Pallone (D-NJ) during a closed-door meeting of incoming Democratic lawmakers over the establishment of a climate change committee.

“This is completely false,” she wrote at the time. “I never even have a direct interaction with him today. When did Politico turn into TMZ?”

She returned to that story this week as she slammed anonymous sources, calling it “100 percent false.”

“This is why public gets confused,” she wrote. “How about a learning moment – honest question so readers can distinguish: when is a journalist required to cite a source?”

Sounds a lot like a question President Trump has been asking!

Of course, there are plenty of legit reasons to criticize Ocasio-Cortez, from her socialist policies to her work ethic.

Just the other day, she announced she needed a break already.

“I am starting a week of self-care where I am taking the week off and taking care of me,” she wrote on Twitter.

She hasn’t even started her job yet.

But she already needs a vacation!

No anonymous sources needed there. She said it herself – making it easy to report on honestly and valid to criticize.

Yet the media still feels the need to pull the “fake news” card any chance it can to make headlines, drive traffic and sell papers or magazines.

So yes, as Trump said, welcome to their world. Welcome to what President Trump has been battling since he announced his candidacy three and a half years ago.

And just as he learned… it only gets WORSE from here.