Trump shares a POWERFUL video (must see!) - The Horn News 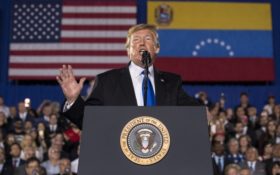 President Donald Trump just released a video that sent chills down the spine of everyone who supports socialism.

“LET YOUR PEOPLE GO,” he said.

I ask every member of the Maduro regime: End this nightmare of poverty, hunger and death. LET YOUR PEOPLE GO. Set your country free! Now is the time for all Venezuelan Patriots to act together, as one united people. Nothing could be better for the future of Venezuela!

During a speech at Miami International University, Trump made sure his message to communist dictators around the world was heard loud and clear:

“The days of socialism and communism are numbered, not only in Venezuela, but in Nicaragua and Cuba as well.”

The White House team shared a powerful video of the speech that quickly went viral. The president’s intent is to directly address Venezuelans, who have been embattled in a political deadlock. Trump has been urging Nicolas Maduro, the country’s socialist dictator, to step down after months of turmoil has plagued the state with starvation and economic collapse.

There have been many calls for Maduro to step down and let National Assembly leader Juan Guiado take over.

Once one of South America’s most wealthy nations, Venezuela has turned into a failed state under socialist rule. First under Hugo Chavez and then under Maduro, the nation has undergone a total economic freefall.

“Years of socialist rule have brought this once-thriving nation to the brink of ruin,” Trump said.

Trump has officially chosen to recognize Guiado as the Venezuelan president, leading several countries to get behind the leader.

Trump even had some words for the so-called “tide” of far-left radicals trying to take over office in the United States and recreate the failed Venezuelan experience in America.

“Socialism by its nature does not respect borders. It does not respect the boundaries or the sovereign rights of its citizens or neighbors. It’s always seeking to expand, to encroach and subjugate others to its will.”

“American will never be socialist country,” Trump said. “We were born free and we will stay free.”

Watch the powerful video below: