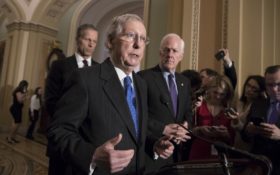 Ahead of the session, Senate Democrats urged the president to follow through on his call for “comprehensive background checks” by endorsing legislation to extend the pre-purchase reviews to online and gun show sales.

“You said that you would be ‘strongly pushing comprehensive background checks’ in an effort to combat the epidemic of mass shootings that has plagued our country,” wrote the four senators led by Senate Minority Leader Chuck Schumer, D-N.Y., citing Trump’s weekend tweet after the Florida high school shooting. “We couldn’t agree more.”

Among those headed to the White House are Sens. Pat Toomey, R-Pa., and Sen. Joe Manchin, D-W.Va., who are pushing their bill, which failed twice in the Senate after the 2012 Sandy Hook Elementary School shooting, to broaden background checks.

“We’re seeing a movement we’ve never seen before,” he said. “The kids have spoken up…corporate America has woken up.”

One major retailer, Dicks Sporting goods, announced it was halting sales of assault-style rifles and high-capacity magazines at all of its stores and banning the sale of all guns to anyone under 21. Trump had floated the idea of an age restriction immediately after the Florida shooting but has not talked about it in recent days. Trump lunched recently with leaders of the National Rifle Association, which opposes the proposal.

Republican leaders, who have majority control of the House and Senate, are reluctant to lead on legislation without knowing they have Trump’s full support and can rely on his popularity with a core flank of the GOP electorate to shield them from political blowback.

“The political reality we’re living in today is if President Trump doesn’t get behind something they won’t have the cover,” Manchin said.

At the White House, the discussion is expected to focus on “school and community safety,” and one of those attending, Sen. Orrin Hatch, R-Utah, has proposed new federal grant funding to stem school violence. Hatch’s bill would offer money for law enforcement and school staff training, campus infrastructure upgrades and mental health resources.

House and Senate Republicans have been talking about boosting school safety resources, but House Speaker Paul Ryan has shown little interest in stricter gun control proposals being floated in Congress, largely leaving the issue in the hands Trump and wary Senate leaders.

GOP leaders did not promise votes on the various gun-related bills they stopped short of offering solutions beyond pending legislation aimed at increasing participation in the existing federal background check system.

Even as he endorsed the measure, Senate Majority Leader Mitch McConnell downplayed its significance, saying it would not be a “panacea” for the rash of gun violence.

But McConnell said he wanted to “at least show some progress toward dealing with one element of the problem.”

The legislation from Sens. John Cornyn, R-Texas, and Chris Murphy, D-Conn., would strengthen the National Instant Criminal Background Check System, though votes were not yet scheduled amid resistance from within the GOP ranks and demands by Democrats to vote on other measures.

The “Fix NICS” bill, similar to one approved last year in the House, would reward federal agencies and states that utilize the background check system, and penalize those that don’t properly report required records used to determine whether someone can legally buy a gun. It was introduced last fall after the shooting of churchgoers in Texas. At the time, authorities acknowledged having failed to report the Texas gunman’s domestic violence conviction to the database.

“Let’s do what we can and build from there,” Cornyn said.

One of Trump’s proposals, to prohibit sales of bump stocks — the devices that turn rifles into nearly-automatic weapons and were used in the Las Vegas mass shooting last fall — is being considered by the Justice Department.

Attorney General Jeff Sessions said top officials believe the hardware can be banned through the regulatory process, a departure from the Obama administration’s approach. The approach is preferred by the NRA and could relieve Congress of pressure for legislative action.