Trump: Health insurance rates will go "down, down, down" - The Horn News 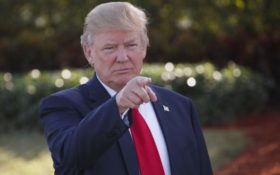 President Donald Trump is predicting that rates for health insurance will go “down, down, down” if Congress passes the House GOP health care bill.

Trump says the number of plans available to consumers will go up with changes to the law.

The president is meeting with about a dozen people affected by the Obama health care law at the White House. House Republicans are trying to dismantle Obama’s law, but their plan to replace it has opposition within the GOP.

Trump says even if Republicans don’t do anything, “It’s going to blow itself off the map.”

The meeting comes ahead of a Congressional Budget Office analysis that is expected to find that fewer Americans would be covered under the Republican plan.