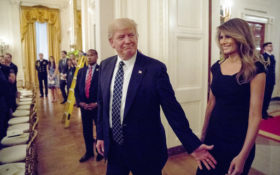 President Donald Trump says he expects to make a deal on healthcare, even though his first attempt fell short just a few days ago.

Trump is hosting a reception for senators and their spouses at the White House. It attracted both Republicans and Democrats.

He says the bipartisan crowd is “a very good thing” and predicts a deal on healthcare will happen “very quickly.”

He says: “I know that we’re all going to make a deal on healthcare. And that’s such an easy one.”

Trump also sees potential for working with Democrats on other issues like infrastructure.

He says: “Hopefully it’ll start being bipartisan. Because everybody really wants the same thing: We want greatness for this country that we love.”