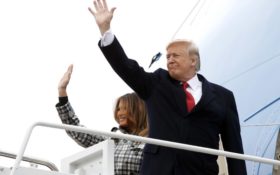 President Donald Trump is heading to Paris on a post-midterms trip to commemorate the 100th anniversary of Armistice Day.

Trump departed Washington on Friday morning for the weekend jaunt to Europe, which comes just days after elections that delivered a split referendum on his presidency.

He said of the trip: “I think it’s going to be something very special.”

Trump will be joining fellow world leaders at a Sunday ceremony commemorating the 100th anniversary of the agreement that ended World War I. And he’ll be meeting with French President Emmanuel Macron. He’s also planning to visit several memorial sites dedicated to American service members in honor of Veterans Day.

But he’ll be skipping the inaugural Paris Peace Forum that’s set to kick off Sunday.