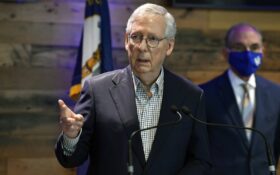 Trump doesn’t just want to be re-elected president in 2024. He is demanding that Sen. Mitch McConnell, R-K.Y. — and any Republican senators that support him — be challenged in the next GOP primary by MAGA Republicans.

“Great job Kevin!” Trump wrote on his social media app Monday. “We must now stop Mitch McConnell and his China flagrant boss, Coco Chow. It’s as though he just doesn’t care anymore, he pushes through anything the Democrats want.”

“The $1.7 TRILLION quickly approved Bill of the week before was HORRIBLE. Zero for USA Border Security,” the 45th president’s statement continued. “If he waited just ten days, the now “United Republican Congress” could have made it MUCH BETTER, or KILLED IT.”

“Something is wrong with McConnell, and those Republican Senators that Vote with him,” Trump wrote. “PRIMARY THEM ALL!!!”

McConnell has been the frequent target of Trump at rallies and social media posts since 2020. The two men have not spoken since McConnell agreed to the Electoral College tally that formalized President Joe Biden ascent to the nation’s highest office.

The Kentucky Republican did not respond directly to Trump’s challenge.

Instead he simply congratulated McCarthy —

Should Mitch McConnell be challenged in his next primary?

Or do you support the Senate Minority Leader?

Should McConnell be primaried?