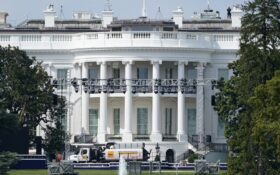 Now he’s leveling up, and could soon find himself as former President Donald Trump’s biggest rival for the Republican presidential nomination in 2024.

Since the midterms, Kemp has filed with the Federal Elections Commission to create a political action committee (super PAC), Axios reported Sunday.

With this committee, Kemp can donate to federal races, like Georgia’s ongoing election for U.S. Senate. Plus, Kemp himself could be testing the waters for another federal run.

Kemp, a Republican, can’t run for governor in 2026 due to term limits. That year, he may try to unseat first-term U.S. Sen. Jon Ossof, a Democrat.

Or, Kemp could be preparing to run for president himself.

“Why wouldn’t he run for President? Not like he’s buddies with Trump. Has beaten him (in effect) before,” Kaus tweeted, referring to Kemp’s 50-point victory over a Trump-endorsed challenger in the primaries. “They all want to be president. And there’ll be a better opportuinty .. when?”

Conservatives expressed a wide range of views on Kemp’s possible run for the White House. Some described Kemp as more charismatic than other possible candidates, like Florida Gov. Ron DeSantis. Others questioned Kemp’s ability to survive in Washington after an entire career in Atlanta.

“Brian Kemp would make a better presidential candidate than Ron DeSantis,” one Twitter user said. Another said, “Brian Kemp running for president could potentially be the saddest campaign ever.”

One person encouraged Kemp to wait until 2028, a year without a clear incumbent in the White House.

For now, Kemp’s team is focusing on the ongoing election for U.S Senate. Over Thanksgiving weekend, Kemp campaigned with Senate candidate Herschel Walker, a Republican, for the first time, and he also appeared in an advertisement for Walker’s campaign.

“We’re all in to help get Herschel over the goal line and keep Georgia red for years to come,” Cody Hall, a Kemp adviser, told Axios.

Earlier this month, Kemp scored a victory over Democrat activist Stacey Abrams, a longtime rival with name recognition. Kemp even benefitted from some amount of ticket-splitting; some Georgians reported voting Republican in the governor’s race but not the Senate race on the same day.

However, Kemp has yet to schedule any fundraisers with Walker, as of Sunday. He also has yet to report any contributions to his PAC.

Georgia will officially hold its runoff election on Tuesday, Dec. 6. However, the state has already opened the polls for early voting.

Why wouldn't he run for President? Not like he's buddies with Trump. Has beaten him (in effect) before. (Rule of thumb is: They all want to be president. And there'll be a better opportuinty .. when?) https://t.co/MnPGdAMFo6