Trump fulfills promise to reform the VA - The Horn News 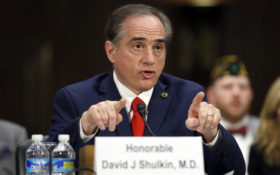 President Donald Trump has signed a bill into law designed to make it easier to fire Department of Veterans Affairs employees.

Trump promised during the campaign to dismiss VA workers “who let our veterans down.” He cast Friday’s signing at a White House ceremony as fulfillment of that promise.

Trump says the law represents one of the biggest reforms to the VA in a generation or more. He promised future steps to transform the VA “until the job is done.”

The measure was prompted by a 2014 scandal at the Phoenix VA medical center, where some veterans died while waiting for care. The VA is the government’s second-largest department, providing health care and other services to millions of veterans.