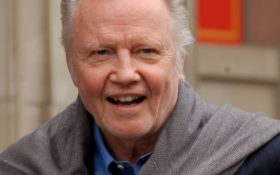 These days, it seems like all of Hollywood hates America, conservatives — and President Donald Trump.

In la-la land, it pays BIG to be a liberal. From Jane Fonda to Alec Baldwin to Meryl Streep, it seems every Hollywood movie star has become a fire-breathing leftist.

While much of Hollywood was ignoring Trump’s “Salute to America” on the Fourth of July, one Academy Award-winning movie titan showed up to celebrate American independence.

Jon Voight, star of “Midnight Cowboy” and “Coming Home,” was in Washington, D.C. celebrating our country and our president.

He was invited by the Moms of America to a “rally for freedom,” an anti-socialism event for Gold Star families.

What he was seen doing when the cameras weren’t running, though, left patriotic fans cheering.

Downpours throughout the day threatened to ruin the festivities.

During a break in the rain, though, one Twitter user caught Voight drying off the chairs where the Gold Star families would be sitting.

Here’s a video of John Voight cleaning the rain off seats for Gold Star families.

This is what it’s all about! pic.twitter.com/q1iAyUnWSs

Though Voight has earned praise for his big screen performances over the years, it’s these small display of kindness that won him real respect in America’s heartland.

“More class than 90% of Hollywood elites,” one Twitter user wrote.

More class than 90% of Hollywood elites

He is truly a mans man! Not like the rest of those glorified hacks in Hollywood!

“There’s no greater honor than to stand with these moms who have lost their loved ones who sacrificed for our country, for our freedoms, and who love and honor and respect our nation,” Voight told Fox News.

“If they knew anything about the Second World War, they’d know that socialism is a disaster. It’s never produced anything anywhere in the world. It’s an economic sinkhole, but it also produces nothing but misery and violence.”