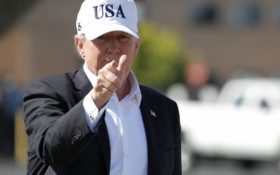 After two weeks of deliberation, President Donald Trump is set announce his choice on a replacement for retiring Supreme Court Justice Anthony Kennedy in just a few hours.

While the final decision is being held close to the vest, Trump did tease reporters by saying “you can’t go wrong” with his “exceptional” final pick. Trump spoke to reporters Sunday afternoon, where he deliberated his decision amid frenzied speculation.

Relishing the suspense, Trump insisted he still hadn’t locked down his decision, which he wants to keep under wraps until a 9:00pm Monday announcement from the White House.

Trump tweeted later Sunday that he was looking forward to the announcement and said an “exceptional person will be chosen!” He is hoping to replicate his successful announcement of Justice Neil Gorsuch last year.

Looking forward to announcing my final decision on the United States Supreme Court Justice at 9:00pmE tomorrow night at the @WhiteHouse. An exceptional person will be chosen!

While speaking with reporters with reporters on Sunday, Trump said, “I’m very close to making a final decision. And I believe this person will do a great job.” Asked by reporters how many people were being considered, the president said: “Let’s say it’s the four people … they’re excellent, every one.”

While Trump didn’t name the four, experts say top contenders for the role include federal appeals judges Brett Kavanaugh, Raymond Kethledge, Amy Coney Barrett and Thomas Hardiman. The White House has been preparing information materials on all four, who were part of a longer list of 25 names originally vetted by conservative groups.

The president has spent the days leading up to the decision mulling the pros and cons of the various options with aides and allies.

Trump expressed renewed interest in Hardiman — the runner-up when Trump nominated Gorsuch, said two people with knowledge of his thinking who were not authorized to speak publicly. But the situation appeared to remain fluid.

Hardiman has a personal connection to the president, having served with Trump’s sister on the 3rd U.S. Circuit Court of Appeals in Philadelphia. He also has a compelling personal story: He went to the University of Notre Dame as the first person in his family to go to college. He financed his law degree at the Georgetown University Law Center by driving a taxi.

Some conservatives have expressed concerns about Kavanaugh — a longtime judge and former clerk for Kennedy — by questioning his commitment to social issues like abortion and noting his time serving under President George W. Bush as evidence he is a more establishment choice. But his supporters cite his experience and wide range of legal opinions. He is also former law clerk to Kennedy, as is Kethledge.

Barrett — a longtime Notre Dame Law School professor who became a federal judge last fall — excited social conservatives since she was questioned about her Roman Catholic faith in her nomination hearings last year, but her brief time on the bench has raised questions about her experience

Kethledge serves as a judge on the U.S. Court of Appeals for the 6th Circuit in Cincinnati, Ohio. He co-authored a book with Army veteran Mike Erwin of “The Positivity Project” published last year called “Lead Yourself First: Inspiring Leadership Through Solitude.”

Trump has enjoyed teasing details of his process in recent days, saying Thursday that he was down to four people and “of the four people, I have it down to three or two.”

The president and White House officials involved in the process have fielded calls and messages and have been on the receiving end of public pleas and op-eds for, or against, specific candidates since Kennedy announced on June 27 that he would retire this summer.

Republican Sens. Lindsey Graham of South Carolina and Roy Blunt of Missouri said Sunday that they believe any of the top four contenders could get confirmed by the GOP-majority Senate.

“They’re good judges,” Blunt said on NBC’s “Meet the Press.” He added: “I think they’d be fine justices of the Supreme Court. I do think the president has to think about who is the easiest to get confirmed here. And I expect we will do that on sort of a normal timetable, a couple of months.”

Outside adviser Leonard Leo, currently on leave from the Federalist Society, said on ABC’s “This Week” on Sunday that this kind of jockeying is standard, noting that “every potential nominee before announcement gets concerns expressed about them by people who might ultimately support them.”

Who should Trump pick for the Supreme Court?