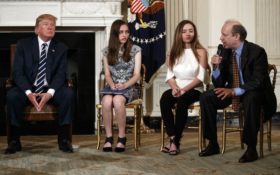 In the aftermath of yet another mass school shooting, President Donald Trump says that if one of the victims, a football coach, had been armed “he would have shot and that would have been the end of it.”

Revisiting an idea he raised in his campaign, Trump’s comments in favor of allowing teachers to be armed come as lawmakers in several states are wrestling with the idea, including in Florida, where the 17 most recent school shooting victims are being mourned.

Assistant football coach Aaron Feis, hailed for shielding students at Marjory Stoneman Douglas High School in Parkland, Florida, “was very brave,” Trump said Wednesday during a listening session with parents and survivors of school shootings. “If he had a firearm, he wouldn’t have had to run.”

“Our most valuable, most precious resources are our children. Why in the world are we going to put them in a circumstance where there is nobody that is armed and trained at any of our schools to be able to respond quickly to an active shooter situation?” Steube told The Associated Press, even as students, including survivors of the Parkland shooting, rallied at the state’s capitol in support of changes in gun laws.

“Our students do not need to be sitting ducks. Our teachers do not need to be defending themselves with a No. 2 pencil,” Republican Alabama Rep. Will Ainsworth said in proposing a bill days after the Valentine’s Day shooting in Florida.

The debate breaches statehouse walls, and teachers — and the public — are divided on the issue. A poll released this week by ABC News/Washington post says 42 percent of Americans believe teachers with guns could have prevented the Florida shooting.

“It just really hit home that these teachers, all they could do was pile those kids in a corner and stand in front of them and hope for the best,” said Hansen, who carries a concealed handgun as she teaches special education students.

“I’m not here to tell all teachers that they have to carry a gun,” she said. “For me personally, I felt that it was more of a solution than just hiding in a corner and waiting.”

Utah is among at least eight states that allow, or don’t specifically prohibit, concealed weapons in K-12 schools, according to the Giffords Law Center to Prevent Gun Violence.

In Austin, Texas, teacher Tara Bordeaux can’t easily see herself taking on that role, preferring to leave it to trained law enforcement officers.

“Would I get the same training and would I have the same type of instinct of when and how to use it?” asked Bordeaux, her state’s 2018 teacher of the year. “I don’t have any instincts in me to be an officer of the law. My instincts are to be a teacher.”

Claude, Texas, Superintendent Brock Cartwright won’t reveal how many or who among his teachers is armed, but the district’s message to potential intruders blares in capital letters in three signs: “Please be aware that the staff at Claude ISD is armed and may use whatever force necessary to protect our students.”

Like other administrators, Cartwright said armed teachers are just one part of safety plans that include drilling for emergencies and shoring up buildings. The small town east of Amarillo doesn’t have a police department, raising concerns about the potential response time for law enforcement.

“Hopefully, we never have to use it,” Cartwright said, “but if we do, our thought is we’re going to hold off until help arrives.”

The president of the 1.7 million-member American Federation of Teachers, Randi Weingarten, called arming teachers “one of the worst ideas I have heard in a series of really, really, really bad ideas.” Nevertheless, a tweeted offer by Butler County, Ohio, Sheriff Richard Jones to train local teachers to carry a concealed handgun garnered so much interest that he quickly capped the number at 300.

When asked by radio host Hugh Hewitt about arming teachers, his education secretary, Betsy DeVos, said states “clearly have the opportunity and the option to do that.”

Magnolia, Texas, parent Robert Morphew would want strict guidelines, including for teachers to be trained and licensed, to support guns in his son’s high school.

“I do think it would be a deterrent, there’s no doubt,” he said.

“Why am I trying to prevent someone from having a gun by giving a gun to someone else?” the mother of two asked.