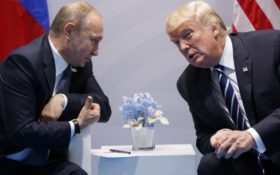 The headlines are everywhere.

“Why did Trump meet secretly with Putin? Here are three theories” – The Washington Post

But it’s clear these headlines are targeting unknowing readers for the pure purpose of higher ratings — and President Donald Trump isn’t having it.

Fake News story of secret dinner with Putin is "sick." All G 20 leaders, and spouses, were invited by the Chancellor of Germany. Press knew!

The Fake News is becoming more and more dishonest! Even a dinner arranged for top 20 leaders in Germany is made to look sinister!

So while liberals continue sounding the alarm that Trump and Putin had a “secret” meeting, they’re ignoring the fact that there were an estimated 40 other world leaders in attendance.

White House spokesman Sean Spicer and National Security Council spokesman Michael Anton confirmed that Trump and Putin spoke at a dinner for world leaders and their spouses at the Group of 20 summit in Hamburg, Germany.

Anton would not specify the duration of the conversation. But he said the discussion was casual and should not be characterized as a “meeting” or even a less formal, but official, “pull-aside.”

“A conversation over dessert should not be characterized as a meeting,” he said.

The dinner, hosted by German Chancellor Angela Merkel, was open only to world leaders and their spouses, as well as one translator per couple, according to a senior White House official who described the event on condition of anonymity despite the president’s criticism of unnamed sources.

The official stressed that Trump spoke with many leaders over the course of the dinner and said he spoke briefly with Putin, who was seated next to first lady Melania Trump, as the event was concluding. Trump spoke with Putin using Russia’s translator, since the American translator did not speak Russian.

The conversation came hours after Trump and Putin’s first official face-to-face meeting on July 7, which was originally scheduled to last just half an hour but stretched on for more than two. The two world leaders were also captured on video shaking hands and exchanging a few words after they arrived at the G-20 summit of industrialized and developing nations earlier that day.

But it is clear the liberal media will jump on any suspected information that contributes to their Russian narrative, regardless of the facts.

Unlucky for them: The Horn News has uncovered footage from the dinner, shared on social media —

Can it be anymore obvious that the mainstream media is involved in a witch hunt?