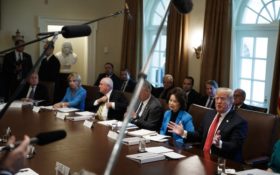 At a Cabinet meeting on Wednesday, President Donald Trump asked his Cabinet secretaries to find a way to cut their next-year’s budgets by 5 percent.

Dubbing it the “nickel plan,”  Trump noted that the Republicans’ tax cuts expanded the federal deficit to its widest level in years.

“Get rid of the fat. Get rid of the waste,” Trump told members of his Cabinet during a meeting at the White House. “And I’m sure you can do it.”

A Treasury Department report released Monday showed the government ended the fiscal 2018 year with a deficit of $779 billion. The total was 17 percent higher than the 2017 fiscal year — which was split between Trump and former President Barack Obama.

“We’re going to be asking for a 5 percent cut from every secretary,” Trump told reporters, adding “if not more.”

The president explained that he could not ask for the spending cuts earlier because he was working with Congress to increase funding for the U.S. military.

He noted that his budget request would not be due until next year —  for the fiscal year that starts Oct. 1, 2019.

According to The Washington Times, the two-year rebuilding budget given to the Defense Department will be exempt from his proposed cuts.

Trump said he’s heard of a money-saving strategy called the “penny plan” to reduce federal spending by 1 percent. “Let’s do the five-penny plan. There’s tremendous amounts of money. I believe we can actually do it easily. We’ll call it the one-year nickel plan. We may do another nickel plan next year, too.”

The president added that some Cabinet secretaries can probably cut more than 5 percent.

“I believe we can actually do it easily,” he said.