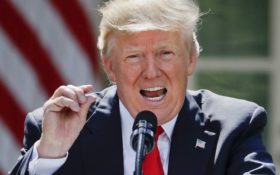 Trump is pushing lawmakers to “move fast” on a tax overhaul, and used his Twitter account to ramp up the pressure — and it has the establishment scrambling to get the much-needed reform done.

The approval process for the biggest Tax Cut & Tax Reform package in the history of our country will soon begin. Move fast Congress!

Trump had dinner Tuesday with a group of Republican and Democratic senators to talk taxes and reform.

The push to overhaul the tax code is a top priority for Trump after establishment Republicans efforts on healthcare reform failed this summer.

Trump has been pushing for changes to the tax code to cut corporate and individual rates and simplify the system.

White House legislative director Marc Short said Tuesday that principles for the tax overhaul will be released “in a matter of days, not weeks.”