Trump Checks: How much you'll get - The Horn News 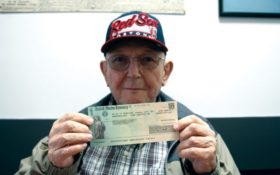 The closed-door convening is the biggest effort yet from Washington to shore up households and the U.S. economy as the pandemic and its nationwide shutdown hurtles the country toward a likely recession. Mnuchin wants Congress to vote by Monday.

The question is: How much will each taxpayer get, and when?

If Senate Majority Leader Mitch McConnell’s proposal is accepted, a one-time $1,200 “Trump Check” would be sent to individuals — $2,400 for couples — as soon as April 6.

On top of that, there would be $500 payments for each dependent child.

Bob is a lawyer that makes $173,000 annually and has no children, he would not get a check.

Ashley, a waitress and single mom with three children that makes $45,000 annually would get a check for $2,700.

Art and Susan are retired with adult children that aren’t dependents. They live off their retirement savings and social security, so they would get a check for $2,400.

These payments depend on whether Democrats and Republicans agree to McConnell’s plan, of course.

Additionally, the McConnell bill would provide $300 billion to small businesses, with loans that would eventually be forgiven for employers who use them to meet payroll expenses.

To shore up industry, McConnell’s plan would provide $208 billion in loans and loan guarantees to distressed sectors, including $50 billion for commercial airlines, $8 billion for air cargo carriers and $150 billion for other eligible businesses, but those loans would have to be paid back.

“We want to lay out the need for urgency and quick action,” said Eric Ueland, the White House director of legislative affairs, entering the morning session. “The American people expect action.”

With McConnell on one side and Senate Democratic Leader Chuck Schumer on the other, Mnuchin took the center seat for the rare high-level talks.

Despite the urgency to act, talks are likely to hit challenges over different opinions on how best to swiftly push out aid.

McConnell laid out the Republican offer Thursday of direct payments to Americans, businesses and industry loans but Democrats said it does not go far enough to help ordinary workers and shore up the healthcare system.

Schumer vowed Friday as he entered the session that Democrats will “fight hard” for their priorities. “We need to work together quickly and do something big and bold to help the American people,” Schumer said.

The GOP leader’s effort builds on Trump’s request for Congress to “go big.”

“We need to take bold and swift action as soon as possible,” McConnell said Thursday, announcing his plan on the Senate floor.

The 247-page McConnell CARES Act puts the leader’s imprint on opening talks with Democrats in Congress as lawmakers prepare to work through the weekend to fast-track perhaps the most urgent legislative undertaking since the 2008 financial crisis.

The negotiations are certain to encounter difficulties ahead, despite the pressure on Washington to act.

“We are beginning to review Senator McConnell’s proposal and on first reading, it is not at all pro-worker and instead puts corporations way ahead of workers,” said a joint statement from Schumer and House Speaker Nancy Pelosi.

The GOP leader’s plan aims to shore up households, businesses and the healthcare industry, which is bracing for an expected onslaught of patients falling ill from the virus that causes COVID-19.