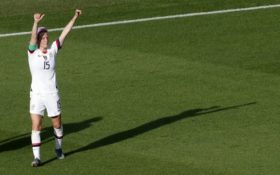 President Donald Trump says he does not think it’s appropriate for a co-captain of the U.S. women’s soccer team to protest during the national anthem.

Megan Rapinoe has described herself as a “walking protest” to Trump’s policies.

Trump told The Hill in an interview Monday that he disagrees with her actions, but loves watching women’s soccer and thinks the players are very talented.

After Rapinoe started kneeling during the anthem, the United States Soccer Federation adopted a policy that requires players to stand during the anthem. Now she stands, but she has been criticized for not singing and putting her hand over her heart like other players.