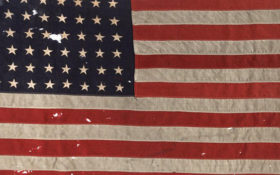 75 years after American troops risked everything to storm the beaches in Normandy, France, the U.S. is bringing back one more great treasure left behind.

The original 48-star flag carried by American troops, which had been shot up by Nazi machine-gun fire, is finally back home.

The flag was a part of a U.S. Navy ship that helped transport soldiers onto the shore. According to Reuters, it was aboard the LCC 60, only one of three vessels storming German-occupied France.

After the war, the flag was reportedly kept by Howard Vander Beek, who held the flag in his personal possession until his death in 2014. Shortly afterward his family auctioned it off to a Dutch collector Bert Kreuk for more than $500,000.

“It was pierced by German machine-gun bullets and ripped by the wind,” said Kreuk in February. “The flag will be going home.”

Kreuk reportedly was interested in giving it back to the American people to honor their country, returning it from where it was on display at Rotterdam’s Kunsthal museum.

Thanks to America’s Dutch friends, the flag is home in its rightful place, the East Room of the White House.

“Through it all, this flag soared proudly above the waters of the English Channel, announcing the arrival of our American warriors.”