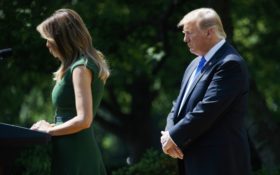 Trump and Rabbi Yisroel Goldstein of the Chabad of Poway synagogue spoke by telephone after Saturday’s shooting.

Goldstein told celebrants during a ceremony Wednesday in the White House Rose Garden that Trump was the first person “who began my healing.”

Goldstein thanked Trump for being, “as they say in Yiddish, a mensch par excellence.” Mensch is Yiddish for a “person of integrity and honor.”

Two other victims of the shooting, including an off-duty Border Patrol agent who fired at the alleged gunman, attended the ceremony.

One woman was killed and three others were injured in the shooting, including the rabbi, who lost a finger.

The entire ceremony, including Trump’s speech, can be seen here —

As we unite on this day of prayer, we renew our resolve to protect communities of faith – and ensure that ALL of our people can live, pray and worship IN PEACE. #NationalDayOfPrayer https://t.co/1a7zphaE6z